Last October, I joined Forma Athletics’ running group. The group is led by Dustin, who runs like a gazelle, but with a gorgeous smile and a nicer backside. Every M/W/F Dustin and our rag tag group of moms can be spotted sprinting down lanes, slogging up endless hills and pounding the pavement alongside the gorgeous north shore mountains. I’m usually in the back half of the pack, sweating like a pig, just trying to survive the workout.

In March, my training became seriously hampered by my love of a good night out with my girlfriends and a weakness for white wine. So as is my nature, I began to downplay my time goal for the BMO half. I told my personal trainer Ainslie that my goal for the BMO half was simply “to feel good, in order to save my energy for a personal best at the Scotia half.” While I don’t like to admit this about myself, if I know I’m not going to be satisfied with my results (in anything), I tend to not try as hard, so that my “failing” can be blamed on lack of effort rather than lack of ability. Crazy and self-sabotaging, I agree.

And this is what Ainslie emailed back to me.

“Bullsh*t. Why wait for the next race to go hard?

I want you to giv’er sh*t!! You have trained a lot for this race and you
are not only ready to take it on and complete it – you are ready to add a
little pepper to your step. Sometimes it’s scary to go for it, believe me
I know!

It’s far more satisfying to give a full effort and feel like you ran your
best than to hold back on the throttle and wonder if you had more in the
tank. Believe me. I know you a little more than you may realize – you are
always the first one to say something’s impossible, then you’re also the
first person to conquer it and surprise yourself.

Ainslie is wise beyond her 26 years. She did not give me room to hide behind myself. She challenged me to be awesome and I went for it. It was a beautiful day for the BMO Vancouver Half-Marathon and I ran my sturdy little legs off. I’ve never ran so far for so long and felt so good.

I drew energy from:
– the cheering crowds (what kind of people give up a Saturday sleep-in to cheer on strangers at 7AM? Angels, that’s who!),
– the gorgeousness of Vancouver on a sunny spring day,
– my kicking Coldplay infused playlist,
– the 10,000 runners themselves (some ran for loved ones lost, some ran with funny messages like, “If you can read this sign, I’m still ahead of you!” and “This is not sweat, it’s liquid AWESOME!” and still others ran simply because they can)
– and of course, my girls! 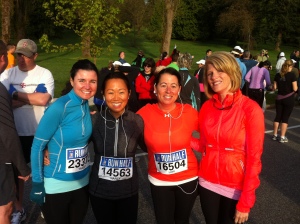 Inspired by Gabrielle Bernstein’s piece, “A Bit of Bragging Looks Good on You,” I’m proud to report I ran a 2:03:33!

Watch out Scotiabank Half-Marathon bunnies, I’ll be gunning for you!